Reflections on 30 Years: An Interview With The Guy That’s Been Here The Longest

The following interview was conducted by General Manager Jeff Wilson (JW) with long time employee Chris Angus (CA) in November of 2019. Chris is the company’s longest tenured employee, having his 25th full-time employment anniversary in 2019. Chris has worked in almost every division of the company over the past 25 years (he claims that he has never done irrigation), and has gained vast experience in the industry. Chris presently is IPM division lead which means that he oversees all pesticide, and fertilizer applications, as well as supervising the detail crews. In the interview when Chris references Syd, he is referencing Horticulture Services founder Syd Stephan. He also refers to the leadership transition as Jeff stepped into the General Manager role in 2012 as Syd stepped away from the day to day management, He also references the ownership transition that took place when Syd sold the company to his daughter Cathy and her husband Trent in 2014. 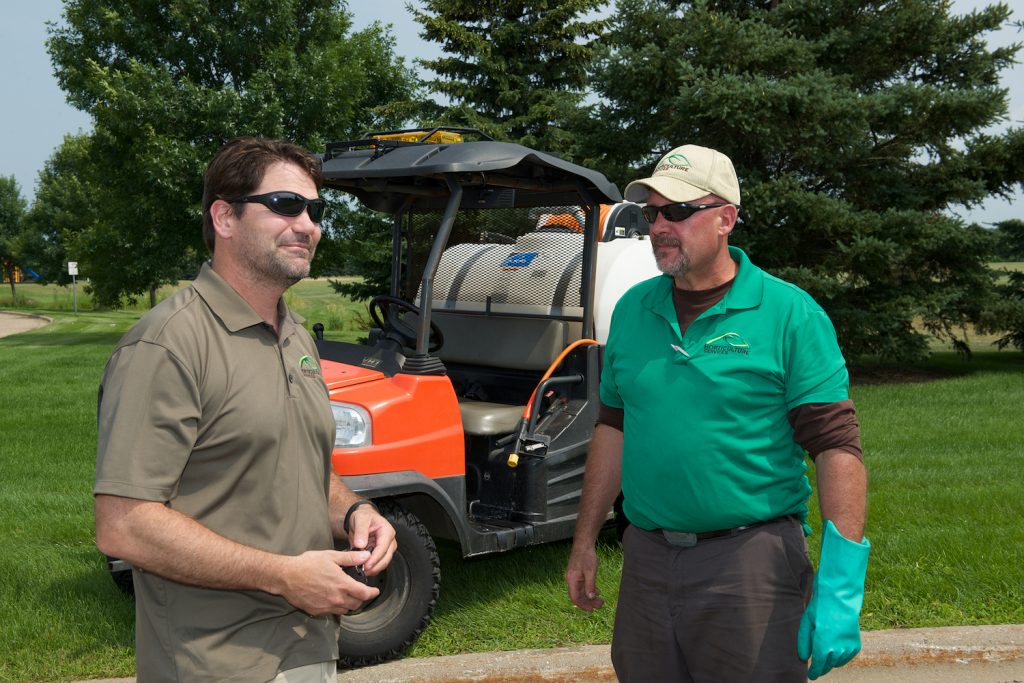 Jeff and Chris visit on site in 2014 | Photo Horticulture Services

JW: How did you end up at Horticulture Services?

CA: I originally learned about the company from my friend Ralph who was one of the original employees. Ralph told me about the company and it sounded like appealing work, so I met with Syd and was hired. I began in 1992 and worked part-time for a couple of years, I then started full time in 1994.

JW: Can you describe those early days working at Horticulture Services?

CA: In those early days there were about six employees between part-time and full-time. We had fun; it was more casual in then. We were given a lot of freedom to do our jobs and make the decisions that we thought needed to be made. Of course now, because there so many more people, that approach wouldn’t work. It is now necessary to have really defined processes to get things done. Training has always been really important in this company, but at the beginning, because you worked alongside Syd, the training was more ongoing as you worked together. Now we have to be a lot more intentional about training because we don’t always have the ongoing opportunity to work alongside the inexperienced employees. In the beginning, since we all learned alongside Syd we knew how to do everything according to his processes, and as a result supervision didn’t have to be as intentional as it is now.

JW: What is your favorite part of working for Horticulture Services?

CA: What comes to mind right away is the people. I worked alongside Syd for years; I really enjoyed getting to know him and developing a friendship as we worked together. I’ve also developed a lot of friendships over the years with the long-time employees like you, Robbie, Cathy, Trent and Todd. I’ve always enjoyed the work, from back in the years when I trimmed shrubs, and did landscaping projects to the IPM work I do now. One of my favorite things I’ve done over the years is aerating. Aerating season always falls during the state fair, and because I was spending the days on the tractor running the aerator I was able to listen to all of Joe Soucheray’s radio broadcasts from the fair. I always felt like those were his best shows and it was fun to listen to all of them. My first couple of years we planted annual flowers and tulips in Milwaukee. Syd would always do special things when we were there, since he used to live in Milwaukee he took us to his favorite Italian restaurant one year, and he also took us to a Brewers game.

JW: Why did you plant flowers in Milwaukee, what was that all about?

CA: We had contract with the same property manager we worked for here. The buildings in Milwaukee were identical to the ones here, so you would be there, look up and have some sort of déjà vu, not really sure where you were. But as I mentioned before, it was always fun because Syd took good care of us on those trips. I always heard horror stories about flat tires and other problems from those that went before me, but I never experienced that, I have good memories of those trips. 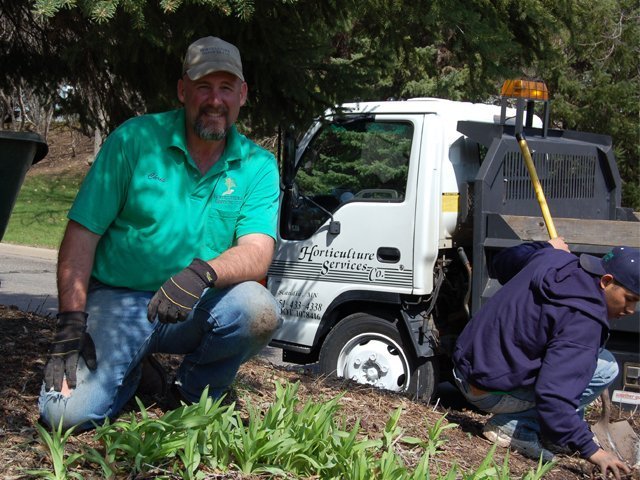 Chris splitting perennials in May of 2008 | Photo Syd Stephan

JW: What has changed the most over time?

CA: The process; needing to have things pretty rigid. Not that we are always inflexible, but we need to do things in a certain way. Purchasing has changed a lot. We used to be able to go to Menards or Home Depot to get what we needed without a PO or anything. Back then we didn’t track those purchases in the same way. Also the training is more robust than it used to be. I think partially because people don’t have the same background that a lot of our early employees did. Back in the early days with only a few employees we could be really selective, and it seemed like we ended up with a lot of people with farm backgrounds. Now that we don’t have people coming from places with skills that automatically fit into the work we do, we have to rely more on training them everything. Fortunately we’ve worked really hard on developing our training practices and that comes pretty easy. Another change is that over the years we have gained more and more Hispanic employees. I’ve really come to appreciate their culture and work ethic. Those guys are really fun to work with and I appreciate them as coworkers.

JW: You’ve talked a lot about working with Syd in really positive ways, what did he bring that you appreciated so much?

CA: His sense of humor. He was (and still is) always sharp and fun to joke around with, we spent a lot of time bantering back and forth. That was nice because I could say whatever came to mind and we would both get a laugh. He was always teaching something. When I was working alongside him he would show me how to do it, and tell me why we were doing it. That stuck with me, when I am training my own crews I always try to teach them the “why” behind what I’m asking them to do. Syd’s a hard worker; I remember when we got our first brush chipper. Syd was trimming and I was following him chipping, I thought we were almost done for the day and turned a corner and saw both sides of the street littered with branches, that’s when I realized we weren’t almost done. Syd would always go after it and was not afraid to work hard.

He treated me like a friend even though I was his employee, I never felt like he viewed himself as above me. I knew I could talk to him about anything I needed. He helped my family a lot. When my grandmother was sick in Iowa he gave me the time off and sent my family down there in his own suburban. He was always doing stuff like that which made me feel appreciated as a person.

JW: What traits did Syd bring as a leader?

When we were a small company, I had to go to “the farm” every morning to pick up the truck, and of course the farm was not only where company truck was stored, but it was Syd’s home. Part of what I had to do every morning was to go into the house where he and his large family were eating breakfast to get my instructions for the day. There was never a sense that I shouldn’t be there, I never felt like I was intruding even though the whole family was there at the table. What’s more, as we started growing as a company he was still just as accessible. There was one time when I was struggling and sent him a text to tell him that. A couple hours later he showed up on site to encourage me. Syd always offered me a lot of grace, when I rolled the truck years back, he was the first person I called. I knew he wouldn’t be upset with me because that’s the kind of boss and person he is. He got there right away, made sure I was ok, and even blamed the road. That was his loyalty to his employee and his friend. He always thanked me for my loyalty, but it was as much him as it was me. I try to follow his example of offering grace when I work with my own crews, I try to offer them as much grace as Syd offered me. 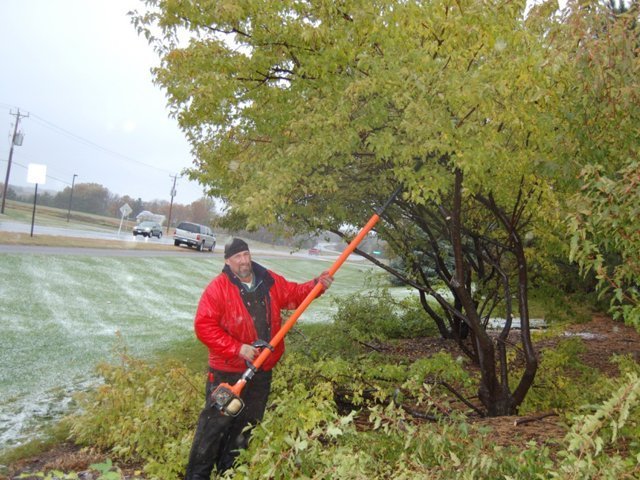 JW: We’ve been through a lot of transitions in the past 10 years or so, what did those transitions look like for you?

CA: I didn’t think it would be a big deal when the ownership transition took place because it was within the family, and it really wasn’t. A couple years before that in 2012, when you became GM you didn’t do anything really drastic to shake the company up so I didn’t feel threatened by that at all. At that time I was really more interested in seeing what was next.

JW: Back when I took over as GM, one of my first assignments from Syd was to identify the company’s core values, is there one of those that stands out to you most?

CA: CPA is one, especially the courtesy part of that. I try to practice that a lot and I see my coworkers practicing it as well. I also identify a lot with the Teachers and Learners core value. I’ve had the opportunity to learn a lot throughout the years. When I started I really had no knowledge about the work we do. I had to completely learn how to do snow removal, mowing and all of the rest of the stuff we do. I’m still learning things too, it’s always good to know that if there is something I’m not the best at I can always ask someone who is good at it to show me what to do. We had an employee start recently that came from another company where she did similar work. After about a week she told me that she learned more here in a week than she learned at the other company in two years. This meant a lot to me because it confirmed I was doing things right.  It’s also a credit to her because she wanted to learn, and it’s really fun to teach when someone wants to learn.

JW: What have you learned about leadership over the past 25 years working here?

CA: I’ve learned to be patient and slow down. Respect those you are leading as people, and just to be mindful in how I interact with them. I try to treat those I lead fairly and not take advantage of them. I try to just continue to teach, and be willing to learn from them too — I don’t put myself above learning. Eric, our longest tenured pesticide applicator who I supervise often figures out something new and shares it with me. That’s how we work together to get better.

JW: Any final thoughts as we wrap up?

CA: I can’t believe I’ve been here this long. I compare myself to my dad who bounced around from job to job over the years and feel thankful for the stability that this job has given me. Even my dad has said that he’s jealous of me because I’ve had the opportunity to work at the same place for so long. Sometimes I’m amazed that the company has stuck with me for so long, but they have, and these have been years well spent.