Have you ever heard the term “IPM” in the context of landscape maintenance and wondered what it means?  IPM is a term that’s thrown around quite a bit but isn’t often defined; leaving people confused, and sometimes too self-conscious to ask what it means.  By the end of this blog post, you should have a basic idea of what is meant by the term “IPM”.

IPM is an acronym which stands for Integrated Pest Management.  So, as the name suggests, it is the act of managing pests through integration.  Integration of what though? The best IPM programs are those that integrate multiple (sometimes seemingly unrelated) things to attempt to deal with a single problem, be it a pest, a disease, or a weed.  Good IPM takes a step back and looks at the bigger picture of what is going on, analyzes it, applies sound horticultural knowledge to it, and takes actions that eliminate or manage the pest in the most efficient way possible.

The term, and concept, of IPM is usually applied to pest insects.  However, at Horticulture Services, we think of IPM in a broader sense.  While insects are pests, we also view weeds and plant diseases as pests as well, and these are often times a more common problem.  With the use of IPM, we are able to manage these pests more effectively, which has tangible benefits like being able to use fewer chemicals and having a softer impact on, or even improving, the rest of the landscape.  Here are a couple examples of IPM in action…

Nobody likes weeds in their grass.  They can ruin what could otherwise be a beautiful yard of grass.  So, we should just spray them with selective herbicide that is made to kill them and be done, right?  You can do that, and you will kill weeds, but they will probably keep coming back just as strong (or stronger) and you’ll keep spraying that chemical more and more.  On the other hand, we could take an IPM approach to this situation.  Like I mentioned above, good IPM starts with taking a step back and looking at the situation from a broad scope.  By stepping back and looking broader, we can investigate why the weeds are there in first place.  If we know why the weeds are there, perhaps we could manage the landscape in a way that minimizes whatever that “why factor” is.  An IPM answer to the problem of turf weeds is to focus just as much on eliminating the “why factor” as simply killing the weed itself.  It is getting to the source of the problem itself, not simply dealing with the problem directly (spraying the weeds).  Our IPM approach to grass weeds is to strengthen the grass through proper fertilization, irrigation, and aeration practices which makes the grass less hospitable to the weeds.  We integrate direct (selective herbicides) and indirect (fertilizer, irrigation, aeration) practices to not only kill existing weeds but to help prevent weeds from becoming an issue in the future.  Not only does this approach allow us to spray fewer herbicides on the grass, it also creates great looking grass!  In fact, at Horticulture Services, we don’t use pre-emergent herbicides.  We have found that the combined integration of our indirect methods (fertilization, irrigation, aeration) do such a great job at strengthening grass, they act as a “pre-emergent” themselves in most areas.  The strong turf combined with targeted post-emergent herbicide allows us to reduce our chemical use, even eliminating an entire herbicide broadcast from our program. 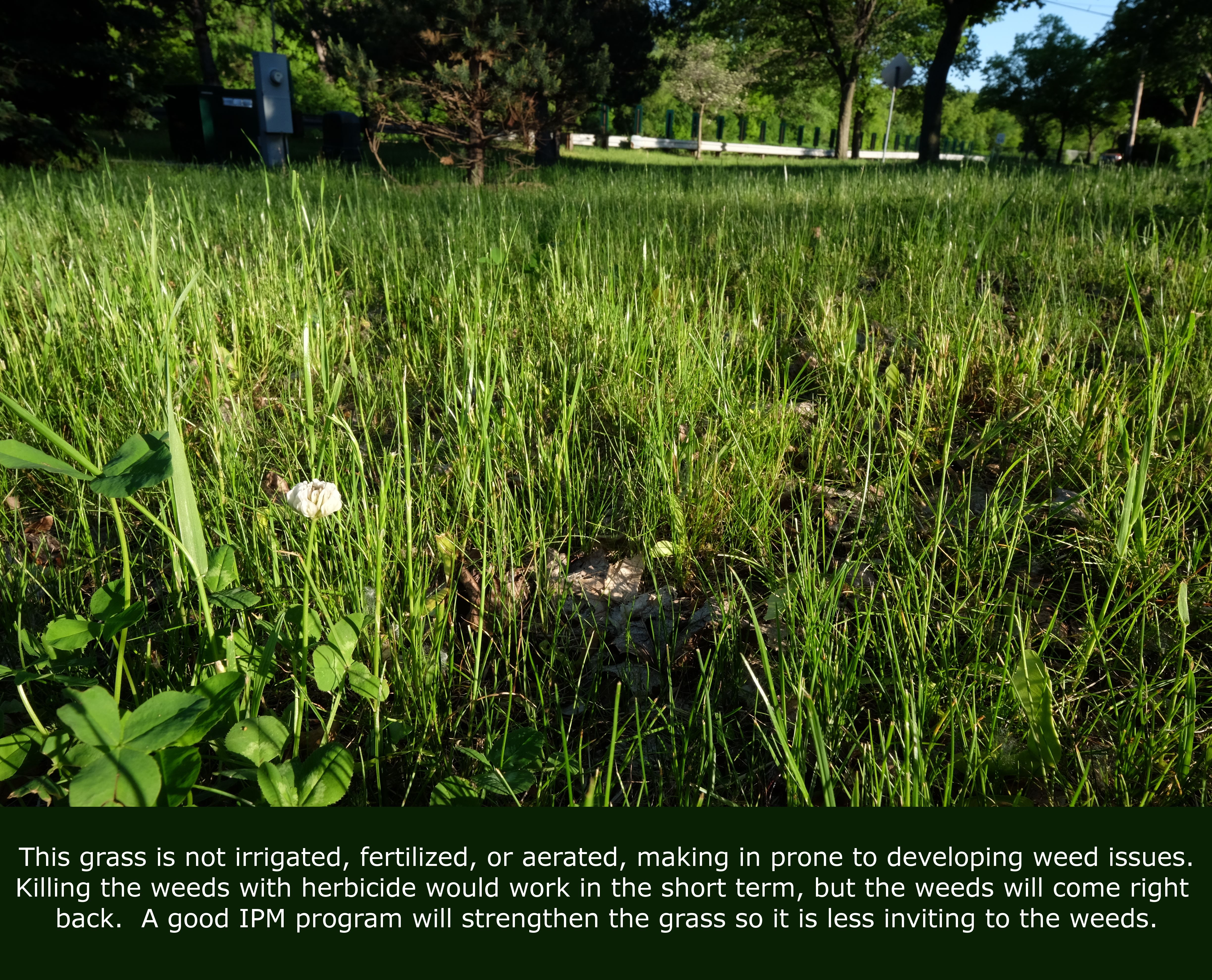 Another example… Have you ever wondered why we clean up leaf litter at the beginning and end of the growing season? Yes, it looks nice and tidy, but there are more important reasons. Cleaning up leaf litter is actually IPM. Many fungal pathogens that attack trees over-winter in leaf litter where they reproduce and spread in the early spring months. By eliminating the leaf litter before that happens, we are indirectly attacking the fungal pest by removing them along with the litter. While we won’t always remove all traces of the fungal pathogen, this practice drastically reduces the population which keeps the fungus from spreading as much as it otherwise would. If we combine that indirect practice with targeted fungicide application at the proper time (here we bring in that horticultural knowledge I mentioned earlier), we can often effectively control a fungal pest. Elimination isn’t always possible, but good IPM practices can help us manage the pests.

Both of these examples highlight the main reason proper IPM is effective.  Through taking in the broader context of the situation, applying sound horticultural knowledge to it, and then integrating proper practices, we can do more than just eliminate or kill a pest.  Proper IPM allows us to minimize that pest from being an issue in the future while reducing pesticide use and improving the look of the landscape.

The following publication was consulted for this blog post: https://cues.cfans.umn.edu/old/ipmbook.htm