What’s wrong with my spruce?

In recent years, the beauty of many spruce in the Twin Cities has significantly declined. This is not true for the entire population, but does speak to a large portion of these trees which many of us treasure in our landscape. A healthy spruce is a wonderful visual screen and wind block. It can also host strands of Christmas lights nicely, and when graced with a snowy white garment, there is little more beautiful in our winter wonderland. But lately, hordes of spruce have been discoloring and shedding massive quantities of needles. What is wrong with these plants and can anything be done?

This spruce decline issue is caused by three agents which are defined by a plant healthcare concept known as the disease triangle. In brief, the disease triangle demonstrates the interaction of a plant pathogen, a plant host, and the environment. These three distinct characters play equally important roles in the health of our plants. 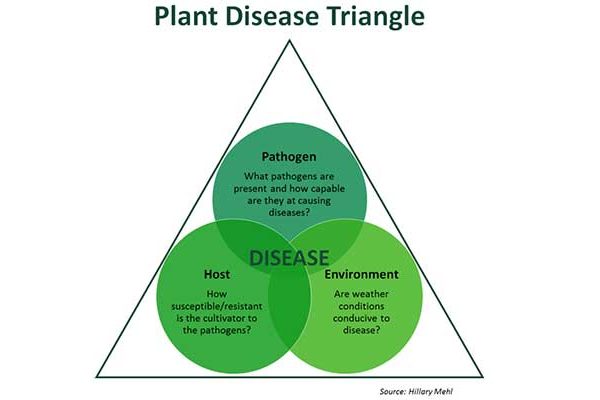 (For more on the disease triangle https://www.mississippi-crops.com/2012/08/31/the-principles-of-plant-pathology-the-disease-triangle-and-influence-of-the-environment/ )

The first agent contributing to the poor appearance of spruce trees is a fungal pathogen. In fact, not one, but a few fungi wantonly infect select species of spruce trees. These fungi include, Rhizosphaera kalkhoffii, Stigmina, and SNEED (Sudden Needle Drop) which may be related to the fungus Setomelanomma holmii. All of these pathogens cause discoloration and defoliation of older needles resulting in unsightly trees with poor health. The life cycle of these pathogens is similar in that they overwinter on the plant, fully prepared to continue the infection the following year. These fungi prefer warm, moist conditions and spread rapidly when a favorable environment is present.

The second contributing agent is the environment. As stated, the pathogens causing the discoloration and needle drop are healthiest when there is humid, moist air surrounding the spruce needles. These preferred environmental conditions explain why the condition of spruce trees seems to be worsening in the past few years. Recent springs have provided ideal temperate, wet situations allowing the fungi to proliferate. Often, the symptoms are worse in the lower canopy of the tree. This, because there is more moisture here due to irrigation and low airflow at the bottom of the tree.

The third agent contributing to spruce decline is the selection of spruce species, the host of the pathogen. The causal pathogens have shown clear preference for Colorado Blue Spruce, Picea pungens, and White Spruce (including Black Hills),Picea glauca. Colorado Blue and Black Hills Spruce prefer drier, windier climates than what middle Minnesota has offered in recent years. These species do not perform well under the combined stress of present pathogen and favorable environment for infection.
The coupling of present pathogen, favorable environment, and susceptible host results in a weak, stressed tree which easily succumbs to repeat attacks from any or all of the aforementioned pathogens. The result, a tree whose landscape value and desirability is greatly reduced.

What then can be done to affect the three factors contributing to the degradation of our spruce? First, the pathogen can be prevented with appropriately timed fungicide applications. Second, the environment around a specific specimen can be adjusted making it less hospitable for disease by removing plants which are crowding the spruce or possibly by redirecting irrigation away from the spruce foliage. Third, Colorado Blue and White Spruce hosts could be replaced with a less susceptible spruce, such as Norway, or other evergreens, such as fir, juniper and hemlock.
There are many spruce throughout landscapes in the Twin Cities that have declined substantially. Many of these specimen are no longer fulfilling their part in the landscape. However, this does not have to be the fate of all spruce. Through careful consideration of the pathogen, host and environment, existing spruce may be preserved and the niche they fulfill in the landscape can be maintained.